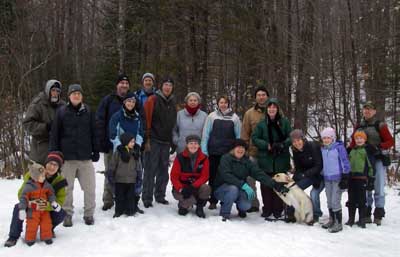 2011 turned out to be quite a year for trails, as it was for many people. The historic floods of both May and August directly impacted our trail. Most of the trail was reopened by Fall 2011, and in 2012 we will be working to not only finish repairs, but to improve all existing sections of trail to be more sustainable as well as more inviting to users. In addition, we are working together with interested land owners to establish right of way for many miles new trail at locations across the state, including what will be a watershed project in the history of the Cross Vermont Trail, a new 200 foot bridge over the Winooski River in East Montpelier.

Residents of all towns through which the trail route passes are invited to get involved in the CVTA. Right now we are seeking to establish an active membership in every town. Contact us anytime to learn more. 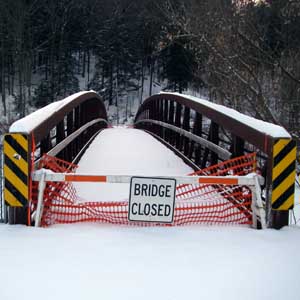 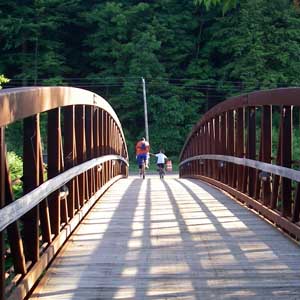 But is predicted to be open next summer
after repair by City of Montpelier.

Oops, back the other way again.

The bike bridge in Montpelier, between Taylor Street and Bailey Avenue, is closed until further notice. This is the portion of the Cross Vermont Trail route shown on (Map 6). Announcement of closure location from the City posted here (PDF 191KB). It sounds like some of the steel structure has rusted out on the bridge. Speculation says that the rust was a reaction of the steel with the treated decking and with the salt used to keep the treadway clear in the winter. In any case, the City of Montpelier Public Works are currently planning a repair in the coming year. In the mean time, an alternate route for Cross Vermont Trail followers is:

UPDATE June 2012: And indeed the bridge is repaired, open again, and looks great! 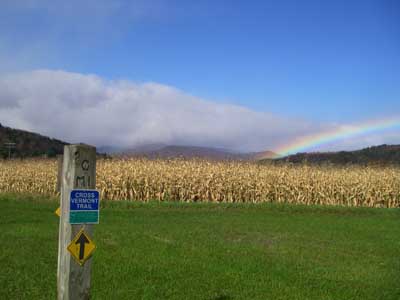 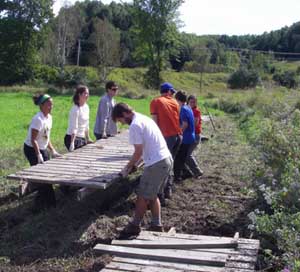 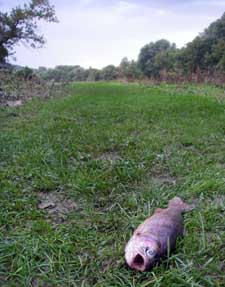 Fish sees receding of flood water
from a different perspective.
(On trail in Waterbury.)

The historic flooding of May 2011, and now hurricane Irene, have impacted the route of the Cross Vermont Trail in numerous places. Here is the latest information we have. If you have updated information to pass along, please call or email us.

Information is listed East to West. First for trails, then for roads.