Significant washout of trail in East Montpelier is FIXED and OPEN
with new bridge and bypass trail.

We have fixed the big washout. As of July 2021 a new section of trail, 600 feet long, built to be generally accessible to all non motorized users, is complete and open, safely winding through the woods to get around the big washout on the railbed, and reconnect the trail between Route 14 in East Montpelier and Country Club Road in Plainfield. 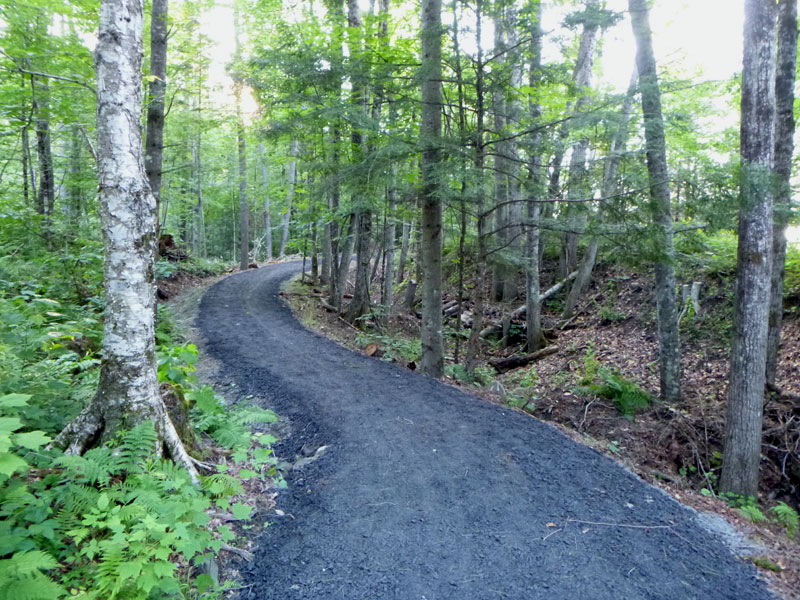 New trail winds through the woods, following the contours like the railroad could not. 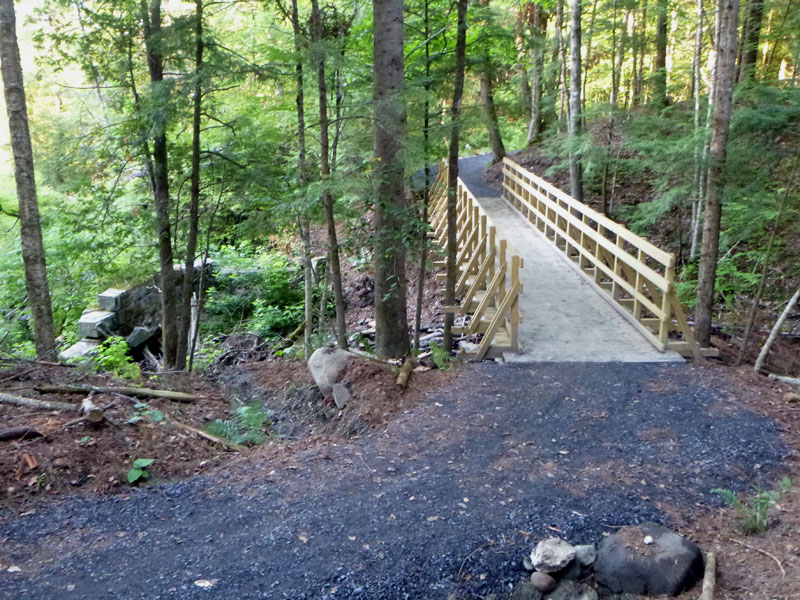 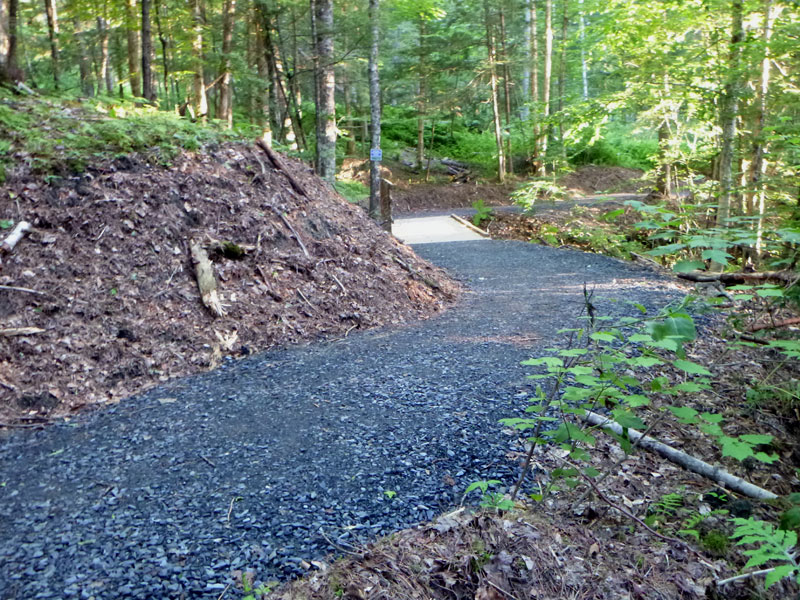 Additional small bridge allows natural seeps and drains to flow beneath the trail. 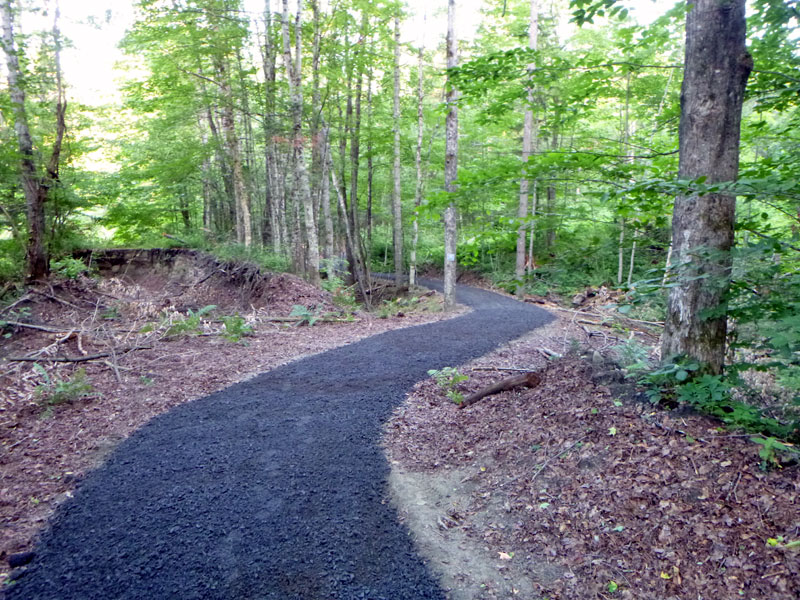 The bypass departs the bed, the collapsing old railbed to left in photo. 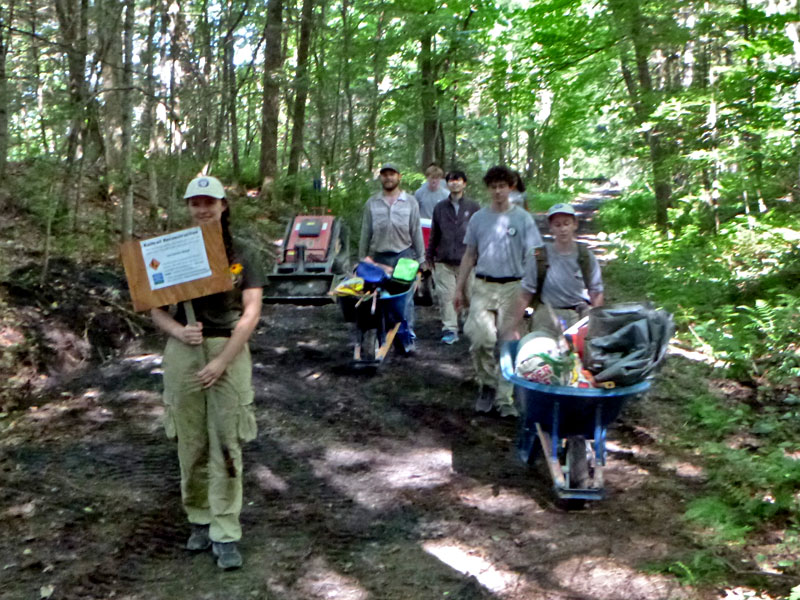 Americorps Crew triumphantly packs out the "trail reconstruction ahead" sign on last day of project. 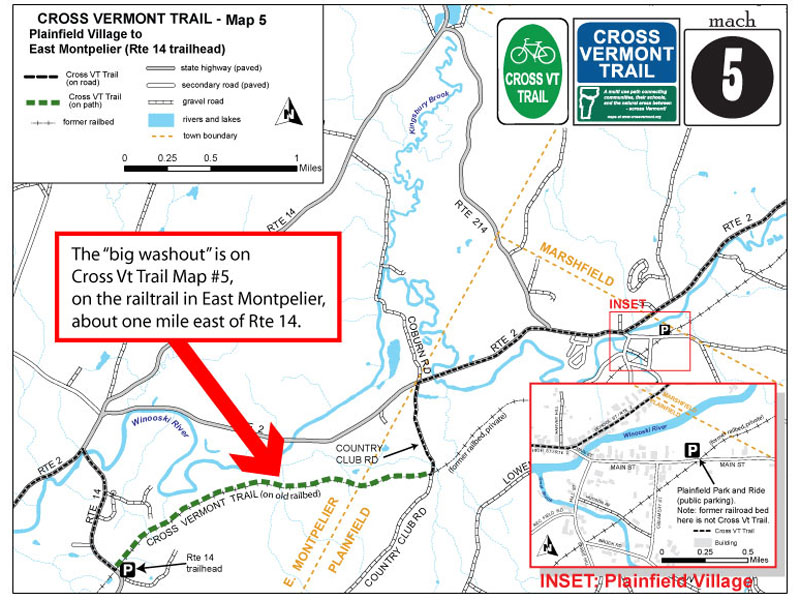 It is located about 0.9 miles west of Country Club Road and about 1.2 miles east of Rte 14. (This is on Cross Vermont Trail Map 5.)

Fall of 2017 CVTA purchased a permanent easement from Fairmont Farm for the trail across the property with the washout. After that we helped to maintain the smaller trail that had been created by users to make a "go-around" the washout. Thanks to all the spontaneous help from people who helped to keep this trail open over the years, while we worked to permit, design and fundraise for the permanent new trail.

Fall of 2020 we built a new fifty foot bridge over the brook, and began construction of the new section of trail, which was completed July 2021. The new trail matches reasonably the experience of the railbed, with a wide, firm, smooth treadway - but also with a little added variety. This section is bike/ped/horse/ski only, and not part of smowmobile trail, so it can be a narrower than the bed (five feet wide). It is also more winding and flowing, matching the countours of the natural ground (which the old railbed could not do). 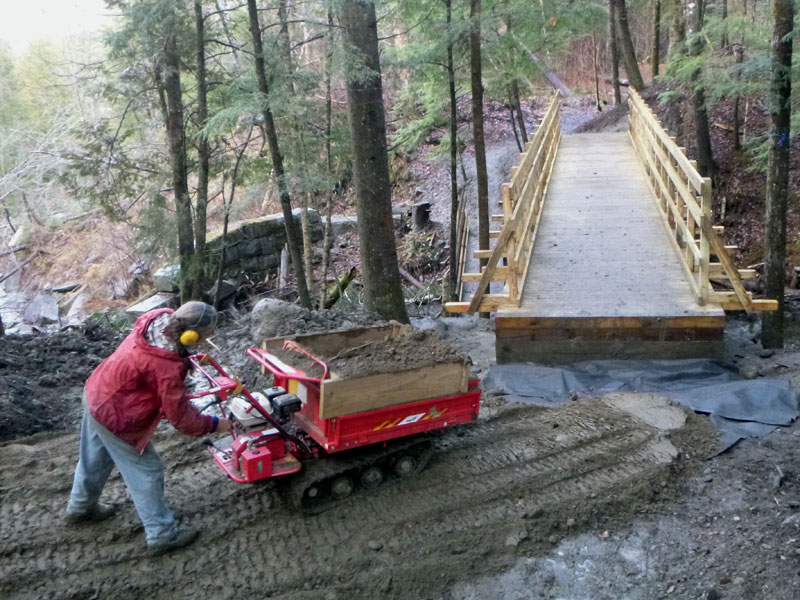 Thanks to the many who have contributed time and energy to help finish this work. Money to purchase the materials needed for this work was been generously donated by: Essex Rotary, VSECU, Oakland Foundation, National Life Foundation, Outdoor Gear Exchange, North Country Federal Credit Union, Washington Electric Coop, Central Vermont Women's Giving Circle, and the Ben & Jerry's Foundation.

The blowout happened May 26, 2011 when an old railroad culvert on the trail in East Montpelier became plugged with fallen trees, stones, and mud. Stormwater swelled a small brook and the water washed around the culvert. By morning the trail between Rte 14 in East Montpelier and Country Club Rd in Plainfield had been cut in two. The washout is about 35 feet deep, and about 80 feet wide. In the years since the storm the site has begun to naturally revegetate and settle into a new stability - we are now watching that story unfold from the safe remove of the new bypass trail. 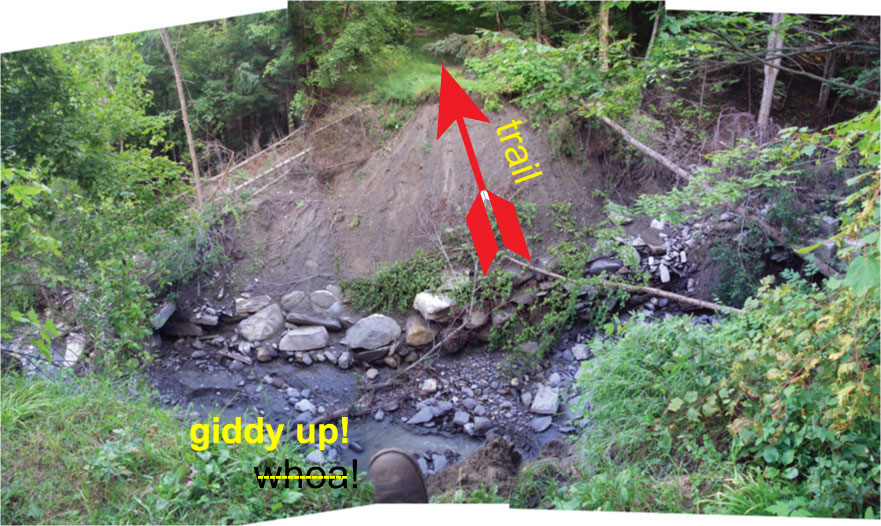 The blowout makes a dramatic cut across the railroad bed. (Photo taken 8/30/2011.) You can see remains of the old stone block railroad culvert running parallel to the brook, at base of the opposite bank. Truthfully, the stream is probably happier to be free of that constriction. Any new crossing will also provide significantly more room for the river to pass through.

The new long term bridge is on the left, the temporary bridge in use since 2018 is in the center. To the right you can see the old granite block culvert and the washed out railbed. (photo taken 12/2/2020).

For the forseeable future, the snowmobile trail will still use the alternate route to get around the washout that's been in place since 2011. This relocation was put together by the landowner (Fairmont Farms), and the East Montpelier Gully Jumpers and Barre Sno-Bees snowmobile clubs. It is not open for summer use. If you are interested in using the snowmobile trail system during the winter, you can purchase a Trail Maintenance Assessment (aka a trail pass) from a number of local businesses.

Numerous other locations in this area were also damaged by the 2011 storms, and all of those were fixed by 2012. The snowmobile clubs took the lead on this work. CVTA was able to raise a couple thousand dollars in donations to contribute to the contractor costs, and we did some pick and shovel work in 2012 to help out as well. (We planted trees to stabilize slopes, and we rebuilt ditches along the old railbed. The filled in ditches were part of what led to the damage in the first place.) In 2020/21 we went back to these sites and bolstered them up some more, cleaning out the ditches and treating the trail surface with fresh gravel.

And that's the last chapter in the saga of the 2011 storm damage - fixed as needed and accepted as the new shape of things as appropriate, whew! 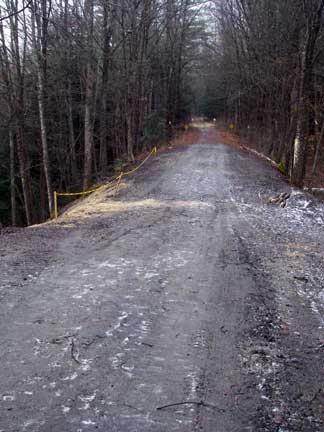 The slump has been filled in as of October 2011.
Site clean up and revegetation was completed in 2012. 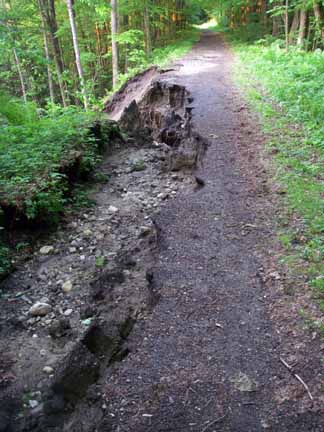 Slump of old railbed just west of the washout
and about 0.9 miles east of Rte 14 trailhead. 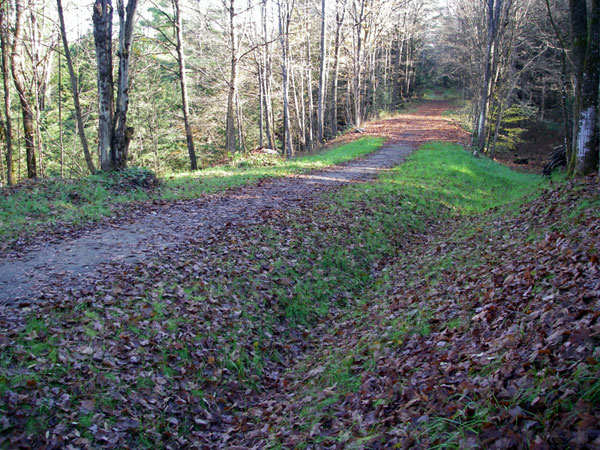 Fall 2012 at "the slump." Ditch is re-established. Grass is growing.
A couple dozen newly planted trees are out of sight
over the bank at the top of the photo.