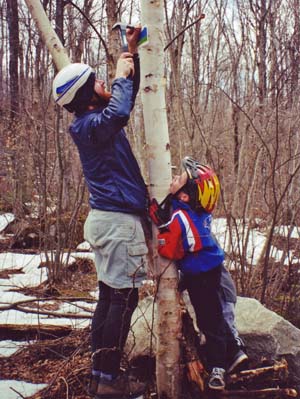 Signs and how to find the Cross Vermont Trail.

1. Use Maps, Cue Sheets and written guide material (in addition to signs).

Navigate the route by combining signs with maps, cue sheets, and written guide material. There are hundreds of signs statewide, but also long stretches between them. It may be difficult to follow the route using signs as the only source of information. 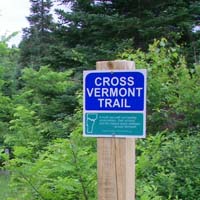 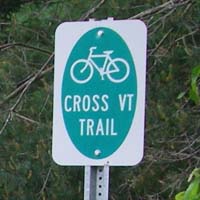 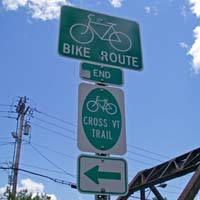 The current standard "route sign"
marks the way on roads and on urban Shared Use Paths. 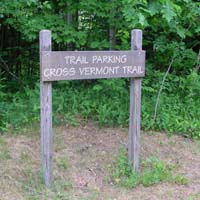 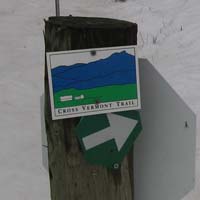 You will also find a variety of other signs along the trail route. Unique signs have been made for some particular spots (such as trailheads). Also, if a previous version of a standard sign is still working, it may not have been replaced yet with the current version. 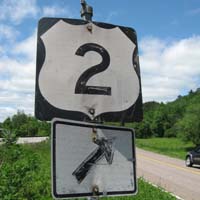 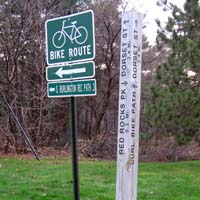 3. Signs clarify the route at significant turns and other "decision points".

Signs may be before, at, or just beyond the turn or decision point. 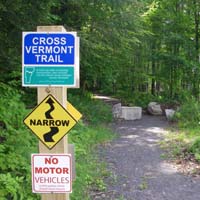 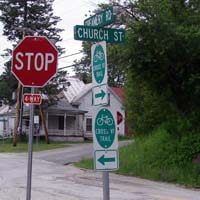 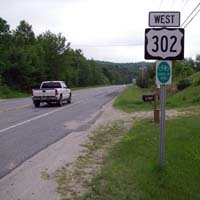 Beyond decision point
(where path segment has ended at road shoulder), beckoning the correct way.

Unfortunately, there is not a consistent pattern that predicts which type of sign location (before, at, or after) you will encounter at any given point. The trail crosses many jurisdictions. Each land owner and government body has a slightly different preference for where to place Cross Vermont Trail signs.

Following along on the maps and cue sheets will help you anticipate when a significant turn or decision point is coming up. Then, as you approach, keep an eye out for signs that can further direct you. If you don't see signs on the approach to the intersection, then pause at the intersection and look for signs beyond it.

At intersections already crowded with road signs, additional signs to mark the Cross Vermont Trail route are "low man on the totem pole". In some places, there is simply no room within sight of a crowded intersection. Use the maps and cue sheets to navigate the turn. And look for a "reassuring" Cross Vermont Trail sign at the first spot we could find to put it! 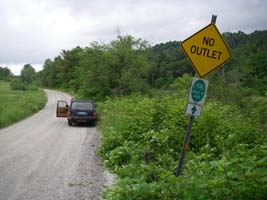 For people headed west,
this sign is beyond the intersection,
on the right side of the road. 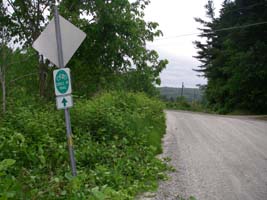 Using the same post for the opposite direction means that for people headed east, the sign is before the intersection,
on the left side of the road.

Sometimes the logic that decodes sign placement is "use the fewest posts, preferably posts that are already there for some other reason." On town roads, sign posts get in the way of snowplowing; often towns allow Cross Vermont signs only if they are grouped on preexisting posts. On trails, having a lot of posts creates clutter (and is expensive.) Grouping signs on the same post can become the deciding factor in things like whether or not they are before or after an intersection, and which side of the traveled way they are on. (See the example in photos to the left.)

How come I keep passing signs that say "Bike Route End", "No Outlet" and "Not a Public Highway"?

And tell us how it went. Never hesitate to let us know if you see a spot where the signs should be adjusted, or the written guide clarified.

Members of the North American Greenways Tour prepare to navigate the next leg of their journey on the Cross Vermont Trail.