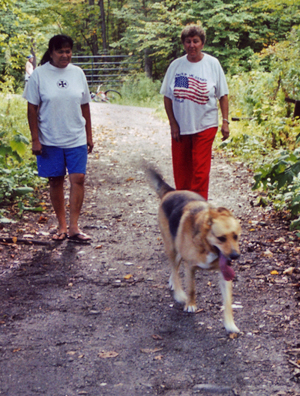 What does it mean to say the route of the Cross Vermont Trail is a "patchwork quilt"?

Despite the variety, there is a minimum quality you can expect. Everything designated as Cross Vermont Trail can be ridden by a person of ordinary fitness on an ordinary bicycle. Also good for walking and running. It will be wide enough for universal accessibility (never less than three feet wide, usually wider). The treadway will be relatively firm and smooth (though currently it may be a little less so than we would like, we're working to catch up on that!) And the grades will be gradual, not too steep (currently, the steepest sections are on roads.)

In addition to bicycles and pedestrians, portions of the route are appropriate for other trail users. In the winter, some of the route can be skied or snowshoed (including several sections coaligned with snowmobile trails maintained by local clubs of the Vermont Association of Snow Travelers). Some sections of the former railbed are popular with equestrians. Paved shared use paths in more urban areas work well for other sports like blading.

Much of the Cross Vermont Trail in the eastern half of the state is on the former bed of the Montpelier - Wells River Railroad. When people think of railbeds, they often think of the large size gravel you see under the ties (the "ballast.") However, there is little ballast on our railbed these days. You will find hard packed dirt mixed with finer gravel - like what is often called a "dirt road." Current conditions vary from pretty good (recently rehabilitated), to OK (maintained but showing its age), to a little rough (in need of rehabilitation). All of the railbed currently open as a trail is passable (an example of roughest stretch shown in photo below.) 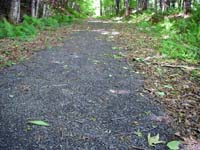 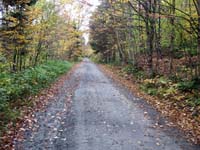 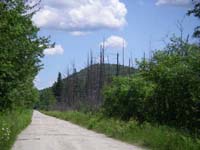 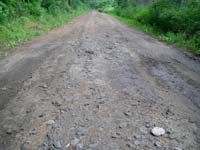 Portions of the trail are on firm, smooth hard packed dirt with mown grass. These surfaces can comply with "accessibility guidelines" and can be bicycled on. It may be rough for a skinny tire road bike. By the way, help us out by letting us know if you come across a section of trail that is in need of a fresh mowing.

Paved shared use paths are what many people think of when they hear "bike path." The Cross Vermont Trail in Montpelier and in Chittenden County consists primarily of paved paths. 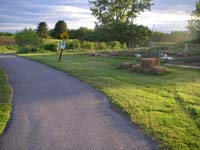 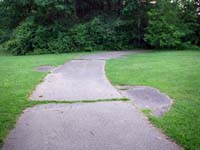 A small amount of the trail is built with wooden tread. Trestles and puncheon are like bridges, except they span uneven or wet ground (rather than crossing an actual river.) 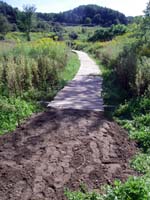 Chicanes, Bollards and other frustrating structures.

In some places you will encounter structures which purposefully make the trail narrower and more winding. Usually the reason is to block motor vehicle traffic in locations where the land owner wishes. 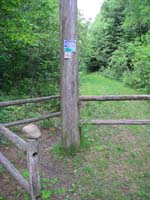 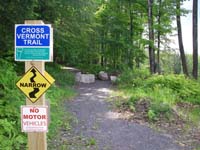 Chicane made from boulders.

Much of the route is designated on town roads. Mostly, these are quiet, scenic and rural. The surface of a typical "dirt road" is firm and smooth, but may be a little rough for a skinny tire road bike. 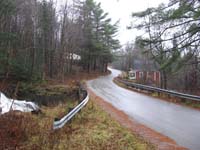 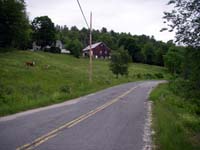 One of the neat things about a state wide trip on the route of the Cross Vermont Trail is passing through a sequence of village centers and business districts. Expect heavier pedestrian traffic, and cars parked along the shoulder of the road. 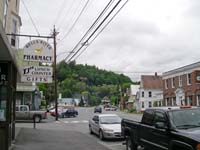 Currently, some of the route is designated on Rte 302, Rte 2, and Rte 100B. (Technically, they are U.S. highways). These larger roads are paved and regularly maintained. Expect auto traffic to be heavier and moving faster. The width of shoulders varies. Remember, it is appropriate for bicyclists to ride in the regular traffic lane, as long as they follow the rules of the road.

Highway with no shoulder. 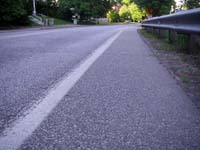 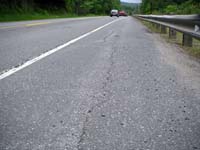